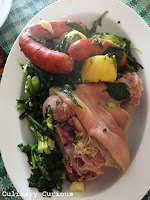 A big mess of salted pork knuckle, boiled potatoes, chorizo sausages and a green leafy vegetable called "grelos" - mature broccoli raab. This vegetable is traditionally from the province of Galicia, in northern Spain, and shows up on the table right around carnaval time, February/March, and again in Fall, coinciding with the two sowing seasons.

Grelos are so traditional and so closely linked to Galicia, and such a part of the culinary gastronomy that they've even received the much desired IGP, Indicación Geográfica Protegida, protected geographical indication. To receive the PGI status, the entire product must be traditionally and at least partially manufactured, prepared, processed within the specific region and ensure its unique properties. Galicia is not only known for grelos. The province is also known for its excellent canned octopus, sardines and other seafoods, worth checking out if you're in the neighborhood. 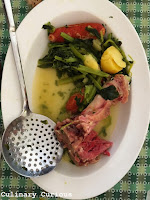 Lift everything out of the pan onto a platter, pour some of the cooking liquid over the food, add a good glug of good olive oil, and serve hot. The saltiness of the knuckle, the bitterness of the vegetable and the paprika seasoned chorizo sausage makes for a delicious combination.

If you can't find smoked pork knuckle, you can replace it with smoked ham steaks, or any other smoked pork meats with bone. Adjust the cooking time depending on the type of meat you plan to use.


As an Amazon Associate we earn from qualifying purchases.
Galicia grelos Spain vegetables 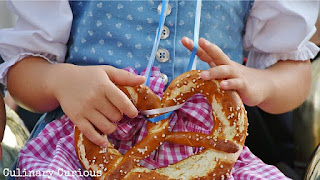 During our layover at the Munich airport, on our way to Barcelona, I kept my eyes out for that typical twisted bread treat - the German pretzel, Brezel . Fashioned from wheat, with a fat belly, a rustic split, fat arms and under 3% fat, the pretzel from Bavaria has a unique character. It's chewier and less sweet than its American cousin and differently shaped than, for example, the pretzel from Upper Swabia that has significantly thinner arms, a precise and sharp cut in the belly of the pretzel and a higher fat content. The brezel's unique name apparently stems from the Latin " brachium ", which means "arms", and is originally a Christian fasting food. Its first mention in literature was as early as the 12 century. Legend says that a baker at the royal court committed a crime and was sentenced to death but because of his exceptional baking skills was given a change by the king to redeem himself. "Bake me a bread that will allow the sun to shine th 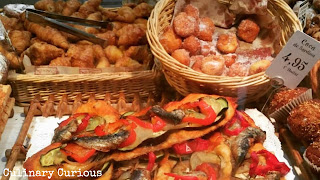 Today, Ash Wednesday, is a day full of food traditions in Catalonia, Spain. As Lent makes its entrance, today was traditionally the last day to eat rich foods. Fats, flours and eggs were used up during these past days (hence Shrove Tuesday, where pancakes are served) because the next forty days were going to be fasting days, and without refrigeration fat and eggs would not keep. For Catalonia, this takes shape in the form of deep fried fluffy beignets, called " bunyols de vent ", air filled donuts, or " bunyols de quaresma ", Lent donuts.These are often bought at the local bakeries, who specifically fry them in the hundreds, to just sell today. Some of them are filled with pastry creams, others are hollow inside, but all are rolled in sugar. Another tradition is to bury “the sardine”, to mark the end of Carnaval and the beginning of Lent, forty days of fasting. Sometimes, a real sardine is buried literally but most often, in order to mimic the burial, people